A brief history of Moss-Rose Cottage 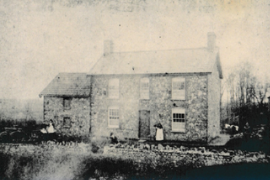 This is one of the first photos taken of the house, believed to be taken around 1871.

A plynth on the front of the house is engraved with the year of build as 1870, I think is correct as told by my mother.

The house has been in my mum’s family since this date and has passed through the family up until the present time. My mother Sheila was married to a french man Paul Renault who came to Britain during the second World War. Their son Mark who is married to Sandra lived at the house until the present day and are happy to share these memories, many told to them by Sheila.

The house was used as a corn merchant and sold corn from the loft at the side of the house, where the horse and trap was stabled underneath. In later years the front room was used as a village post office and run by the family until my parents moved into the house in the 1970s following the death of her parents.

As you can see from the photo, Wentloog Road was a country lane and Moss Rose Cottage had a large front garden until it was taken to make way for the road through Rumney, known now as Wentloog Road.

Sheila and Paul lived in the house until they both passed away.